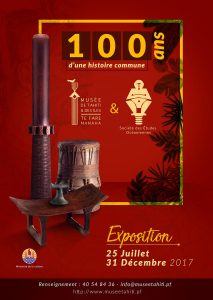 The Oceanian Studies Society (SEO) is celebrating its 100 years, and the Museum of Tahiti -Te Fare Manaha propose to pay homage to its outstanding members, through a red thread tracing its common history with the museum institution.

This exhibition, which will take place from July 25 to December 31th of 2017 in the permanent exhibition hall, will highlight some twenty objects related to SEO, as well as the history of the institution. The first Museum of the French Establishments of Oceania was created in 1917, by the governor Julien, on the first floor of the former Bruat barracks.
The Museum of Papeete was born, which will become the Museum of Tahiti and its Islands that we know today.

Since its creation, the fate of the museum institution is linked to that of the Society of Oceanic Studies (SEO), founded a few months earlier and whose mission is notably the study of the Polynesian civilization. The beginnings of the Museum managed by the Society of Oceanic Studies were sometimes difficult.
Together these two institutions will cross two wars and will have to move three times before, driven by the energy and passion of outstanding personalities of SEO, the Museum of Papeete will gradually endowed with the means that allow it a proper evolution. This legal and physical autonomy is achieved with the creation in 1974 of the Museum of Tahiti located on the tip of Nu’uroa. Thus, if the current building of the Museum of Tahiti will open in 1977 to the public, its history goes back much further and is intrinsically related to that of the Society of Oceanic Studies.
Both having 100 years of history in common, the Museum of Tahiti had to pay homage to these men and women, passionate about the Polynesian culture, which allowed the establishment of a structure adapted to the conservation, the enrichment and enhancing the material heritage of our community. This particular exhibition is a kind of red thread, which unfolds 100 years of stories of two centenary entities, in the history of our five archipelagos as developed in the permanent exhibition halls.
So “100 ans!” brings to light objects, many of which have been in the collections of the country since the origin of the Papeete Museum. Through these objects, portraits of key figures and investigations of the Society of Oceanic Studies, this is the story of the Museum of Tahiti and the Islands that takes shape, against the backdrop of the history of knowledge of our Oceanian civilizations.

At the dawn of a new era that begins with the upcoming reconstruction of the permanent exhibition area, this historical retrospective fulfills our duty to remember, honors this anniversary and highlights the founding values ​​that allow us today to project ourselves towards the future.

If Culture is in perpetual motion, our heritage remains our common base. This base has been left to us, our duty is to transmit it intact to those who will come, and who will continue this work of passion and perseverance undertaken by the first founders of our museum institution.