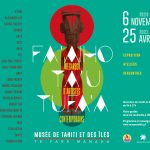 Our exhibition Fa'aiho ta'u tufa'a
Events at the MuseumMuseum of Tahiti and her Islands , punaauia
From the 6th of November 2020 to the 25th of April 2021, the Museum of Tahiti and her Islands invites you to discover our brand new exhibition: Fa’aiho ta’u tufa’a. Fa’aiho, means “regain consciousness”, or “enlighten”. Tufa’a refers to the notion of heritage. This exhibition thus offers a reflection on the confrontation of both contemporary and antique works of art. You will have the opportunity to discover the Polynesian culture through the eyes of 22 contemporary artists as well as antique Polynesian pieces held at the Museum. Four themes were explored by the artists: Tiki-ti’i, ornaments, canoes and music. Unique pieces of artworks have been created especially for this event.
Lire la suite >

Presentation by the curator of the exhibition

“Here, near my hut, in silence, I dream of violent harmonies in the natural scents that make me drunk. Delight, relieved of some sacred horror that I guess towards the immemorial. Formerly, smell of joy that I breathe in the present. Animal figures of a statutory rigidity: I do not know what is old, august, religious in the rhythm of their gesture, in the rare immobility. In dreaming eyes, the cloudy surface of an unfathomable puzzle. And here is the night – everything rests. My eyes close to see without understanding the dream in the infinite space that flees in front of me and I feel the painful march of my hopes.

These lines are taken from a letter from Paul Gauguin to André Fontainas dated March 1899. In this missive, Gauguin tries his best to argue in favor of the works he has created in Tahiti and which are going to be exhibited in Paris. More than a century later, these words have lost none of their relevance. Chinese artists had gained experience of European modernism in the 1920s and 1930s, but because of war, political movements, and the influence of pastist ideas, it was not until the eighties that the new generation of artists was able to seek to understand the modern European art opened by Cezanne, Van Gogh, and Gauguin. So, it is precisely the position of revolt of the European artists of Gauguin’s generation and their works which made it possible to completely release the Chinese artists from the yoke of the Soviet socialist realism, that these began to seek to understand like them the painting. and even, through the understanding of art, to arrive at an “inverted observation” [in Chinese philosophy, it means to observe beings and things from their point of view and not from that of the observer] of meaning of life. When Gauguin in his letters from Tahiti answers the question about his technique, he writes: “It’s an improvisation technique that follows an intention to create the morning, a seemingly natural-looking reality, and I apply this technique according to my own method of expressing my thought] (Tahiti, 1896-97).

Today’s artists are accustomed to this type of concept, but in the 1980s China this type of modernist appeal had the effect of overturning all old artistic norms and breaking the shackles that hindered the development of modernity, the so-called “fine arts movement” 85 was the result of the influence of many modernist artists such as Gauguin and their designs and their art. It is roughly since the 1990s that Chinese art has entered a new phase of “contemporary art” development, and that Gauguin’s typical essentialism has become “outdated”, and that people have more and more admitted all art capable of self-justification.

In this context, the Chinese artists of the “new wave 85” eager to enter the post-modern phase have experienced the doubt marked by the return on oneself: today where everything can be art, that is art at bottom? In fact, this question comes down to the one that tapped Gauguin in his day: Where do we come from? Who are we ? Where are we going ? Even if the name of Gauguin and the art of this “savage” are familiar to Chinese artists, in fact, when they think about it, they all have, notwithstanding their personal views, respect for him, because of all It’s thanks to him and a few others that China has had its modernism, and even its contemporary art.

Today, Chinese contemporary art is in every major exhibition in the world, seen in different institutes of fine arts, it has become an important part of contemporary world art. It is in the light of this that we chose some contemporary Chinese artists with a certain international reputation and active on the world art scene and invited them to express their particular historical vision, by means of their own language and their own forms, to the memory of Gauguin and his contemporaries. When they experience the natural environment where Gauguin lived, perhaps they will better understand the founding character of Gauguin’s “creative intuition”, its importance and its particular meaning. In 1903, Gauguin complained that there were many local artists in the Marquesas Islands, but that the authorities had not created a museum in Tahiti to preserve and display the works.

Now, so many years later, contemporary Chinese artists are going to exhibit theirs at the Museum of Tahiti and the Islands, what could be better than that to explain the changes in our world? What could be better than to say that art is for humanity the most effective bridge for the communication of souls? In 1892, Gauguin completed a painting entitled “The spirit of the dead watches”, in fact, it is he who watches, it is all the artists, it is all the men endowed with creative power, and this exhibition, it is is a tribute of the Chinese artists to this “dead who watches, Gauguin!