A traveling artist in Micronesia, the floating universe of Paul Jacoulet 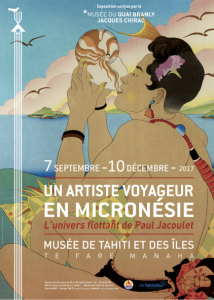 The primary mission of the Museum of Tahiti and the Islands is to preserve and enhance the anthropological collections of French Polynesia that reflect the richness and diversity of the common heritage. But the Museum also participates through the exhibitions it offers, to the development of local cultural life by allowing the Polynesian public to discover other cultures, to travel to other horizons through the works of temporary exhibitions.

The hosting of the traveling exhibition “A traveling artist in Micronesia – The floating universe of Paul Jacoulet” conceived by the musée du quai Branly – Jacques Chirac is a great opening opportunity on other Oceanian cultures and in particular the archipelago Japanese and Micronesia. The Museum of Tahiti and the Islands invites the Polynesian public to discover the subtle and refined world of Paul Jacoulet and to travel in his wake from Japan to Micronesia.

Sixty-six prints, loaned by the Quai Branly Museum – Jacques Chirac, offer us a glimpse of Paul Jacoulet’s striking work, and reveal his “intimate, aesthetic and ethnographic” look at the populations they meet during his travels. It is in particular the representation of tattoos and micronesian ornaments, in its similarities and its variants with the Polynesian culture, which will challenge the Polynesian spectator sensitive to the vision of an artist who has been ethnographer by the meticulousness of the rendering of his observations. For fans of Japanese culture, for the connoisseurs of the art of ukiyo-e, and for art lovers, this exhibition will remain a memorable experience as the mastery of the technique of wood engraving and print as well that the richness of the pigments used by the artist give to all the exhibited works an exceptional cachet. The Museum of Tahiti and Islands -Te Fare Manaha is pleased to be able to present, thanks to the partnership we have with the Quai Branly Museum – Jacques Chirac, an exhibition of this quality that allows the Polynesian public, and especially our children, to discover the world beyond our coral reef.

The exhibition A traveling artist in Micronesia – The floating world of Paul Jacoulet “- was designed by Mr. Christian Polak, Doctor in Law, specialist in the history of Franco-Japanese relations, specialist of the work of Paul Jacoulet . It was presented at the musée du quai Branly – Jacques Chirac from February 26 to May 19, 2013. This first exhibition of the work of Paul Jacoulet in France gathered 160 watercolors, drawings and exceptional prints from the donation made to the musée du quai Branly – Jacques Chirac by Madame Thérèse Jacoulet-Inagaki, adopted daughter of the artist Paul Jacoulet (1896-1960) and representative of the three other heirs-donors, Messrs. Chisei Ra, Louis Young Whan Rah and Shozo Tomita. A set of wood dies used for the preparation of prints, some objects from the musée du quai Branly – Jacques Chirac and the National Museum of Natural History in Paris, as well as audiovisual programs completed this presentation.

French artist Paul Jacoulet arrived in Japan in 1899, where he spent most of his life. He travels to Korea, China, and Micronesia, where he travels many times to take portraits of locals. Through his prints, watercolors and drawings, the artist represents the men and women he has met with a look that is both intimate, aesthetic and ethnographic.

The exhibition proposes 5 major themes, which will allow to travel in his abundant and singular work.

Paul Jacoulet remains, above all, a Japanese artist in his training and sensitivity. Born in Paris in 1896, he arrived in Japan at the age of three and grew up in the high society of Tokyo. He receives a solid artistic education that will spark his interest in painting, calligraphy and gidayu. This complete artist is guided, throughout his career, by his passion for Japanese artistic expression modes, in all their forms.

His admiration for his drawing teachers and for the great masters of Japanese printmaking, including Utamaro, is evident in his work but never takes the form of a copy. It leads him very quickly to a personal style, which flourishes during the many journeys undertaken from 1929.

In his series of watercolors and Asian prints, devoted to Korea, China and Japan, Paul Jacoulet always takes a look shaped by his Japanese artistic culture. Whatever the places where they are inspired, his compositions remain above all faithful to the conventions of woodcutting with portraits or representations of everyday life, in which the rendering of costumes often plays a key role.

The technique of Japanese printmaking (ukiyo-e)

The production of prints boomed in Japan during the Edo period (around 1600 to 1868). It has allowed the widespread dissemination of popular imagery reflecting the tastes, lifestyle and culture of the bourgeois society of Edo, today Tokyo. These printed images describe a “floating world” (ukiyo-e), that of the layman, men and nature subject to impermanence.

From a technical point of view, Japanese print is a polychrome woodcut. It is obtained by engraving the original drawing of the artist on a wooden matrix, then printed by manual pressure, using a circular buffer (baren) on the paper support.

The challenge for the artist, author of the original drawing, is here to translate his subject in a synthetic way by a line reduced to the essential, reproducible by the engraver. Ukiyo-e is produced by close collaboration between artist, printmaker and printer.

Historically, the initial process of black and white print has gradually given way to color images, more complex and costly to achieve. Each of the colors is indeed obtained separately, using a specific matrix. The prints of Paul Jacoulet, often extraordinary by the extent of their palette, thus required up to a hundred passages to print.

2.To the light of the islands of Micronesia

During the first half of the 20th century, the archipelagos of Micronesia passed from the guardianship of Germany to that of Japan, which kept control from 1914 until the end of the Second World War. It was during this period, in 1929, that Paul Jacoulet visited these islands for the first time. Dazzled by nature and the local cultures he discovers, the artist travels regularly through the region until 1932. He brings back from each of his travels an abundant production of watercolors and drawings, which he engraves and prints by his collaborators. With a sense of almost monographic observation, these micronesian series magnify the diversity of natural species and societies encountered. They always manage to make sense of the intense light of the Pacific islands.

Particularly innovative in their subjects, these works inspired by Micronesia are also representative of a style that finds, therefore, its full maturity. Thanks to them, Paul Jacoulet is hailed by critics for the accuracy of his line and the brilliance of his colors.

3.The art of tattooing

Under the influence of colonial and missionary presences and the Japanese administration, Micronesia experienced strong cultural changes in the first half of the 20th century. The tradition of tattooing, in particular, is already disappearing when Paul Jacoulet visits the region from 1929.

Seduced by these archipelagos and by their inhabitants, the painter develops personal relations, particularly to Yap and Ponape. This proximity allows him to observe the tattoo that will inspire him many studies and preliminary drawings. Beyond their artistic dimension, these watercolor and graphite mine series are today a unique iconographic corpus, testifying to ancient micronesian tattoos.

The representation of tattooed bodies, both sensitive and intimate, reflects the artist’s wonder for these island cultures. They thus offer a poetic and humanist vision, far from the discourse and scientific drawings of ethnologists.

4.The art of adornment

In contact with the people of the Pacific Islands, Paul Jacoulet takes a close look at the aesthetics of traditional adornments. The works he devotes to it today possess a strong documentary value and testify to the important place occupied by the ornamental body in these societies.

By focusing on this subject, Paul Jacoulet renews a classic theme of Japanese woodcut, whose portraits describe in detail the clothes, hairstyles and makeup. The elegance of feathers and shells in Micronesia echoes the sought-after appearance of kabuki actors or Japanese courtesans who have inspired the genre of printmaking.

This particular taste for the ornament of the body also joins that of the theater and the disguise in a multiple artist who remained, during all his career, at the same time painter and reciter of costumed song (gidayu).

In Paul Jacoulet, the approach of the intimate is closer to the nude of Western painting. The aesthetics of the features and the modeling of the body are fully emphasized, without any direct reference to eroticism. On the contrary, the quasi-nudity of the Micronesian world allows the artist to evoke an original innocence, close to nature. The lively drawing of the bodies, standing out against brilliant decorations, animated by vegetation and insects, offers a vision of a world obeying the same natural aesthetic and beyond all shame. 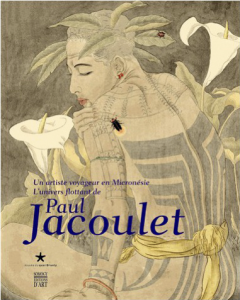 Guided tours by Miriama BONO, with support on IPAD. You can come with your IPAD, and download the presentation with QR codes.

Thursday, September 7th, at 10:00 am in the presence of Mr Stéphane Martin, President of the musée du quai Branly – Jacques Chirac and Mrs Thérèse Jacoulet-Inagaki, adopted daughter of the artist Paul Jacoulet

The Exhibition Catalog Paul Jacoulet, a traveling artist in Micronesia – musée du quai Branly – Jacques Chirac – will be on sale at the Museum of Tahiti and her Islands.

The Museum of Tahiti and the Islands – Te Fare Manaha thanks

The Quai Branly Museum – Jacques Chirac and its president, Stéphane Martin for the loan of this exhibition.

The curator of the exhibition Christian Polak, Doctor in Law, specialist in the history of Franco-Japanese relations, specialist of the work of Paul Jacoulet.

The Scientific Advisors who collaborated in its realization:

This traveling exhibition is made possible thanks to the donation of the works of Paul Jacoulet to the musée du quai Branly – Jacques Chirac by Mrs. Thérèse Jacoulet-Inagaki, adopted daughter of the artist, as well as by Messrs. Chisei Ra, Louis Young Whan Rah and Shozo Tomita. We show them our gratitude and our recognition.

Curator of the exhibition in Tahiti: Miriama BONO, director of the Museum of Tahiti and the Islands – Te Fare Manaha.

Finally the Museum of Tahiti and her Islands – Te Fare Manaha warmly thanks:

The Minister in charge of Culture, Mr Heremoana Maamaatuiahutapu.
The service of Culture and Heritage.
The company Air Tahiti Nui for its partnership in the organization of this exhibition and its faithful support.
The Meridien Hotel in Tahiti.
As well as all the people and institutions who worked for the success of this exhibition, and in particular Mrs. Emmanuelle Lussiez, Chargée de diffusion – Cultural Development Department of the musée du quai Branly – Jacques Chirac.

And finally, mauruuru roa to the staff of the Museum of Tahiti and Islands – Te Fare Manaha for his contribution to the organization of this exhibition and his unfailing dedication.